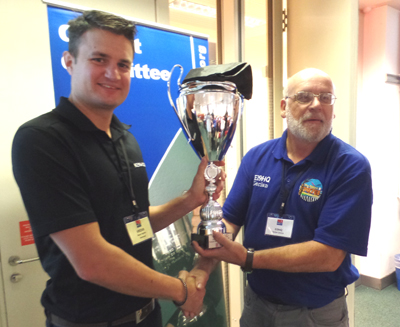 Welcome to the UKEICC
- the UK and Ireland Contest Club -
The UKEICC was formed in 2014 to promote the development of HF contesting in the UK and Ireland
and to encourage newcomers into HF contesting.
The UKEICC is run by a small but enthusiastic group
of keen British and Irish contesters.
Image shows Declan EI9HQ collecting the Kenwood Cup from Mark M0DXR
UK/EI DX CW Contest    22nd/23rd February 2020
Thank you for taking part in the 2020 UK/EI DX CW contest.
The UKEICC team hope you enjoyed the contest.

The *provisional* results are shown on the Results page. We are still processing some *problem* logfiles and will re-run the adjudication software later and update the results tables.

Each year, the prestigious Kenwood Cup is awarded to the leading UK/EI Unassisted entry,
and there are Plaques and Certificates for the winners (UK/EI, Eu, DX etc) of each section.
2020 Rules - DX Contests
Upload your Cabrillo logfile
2020 DX CW Results
UKEICC 80m Contests    2019-20 series
The 80m Contests take place on the first Wednesday (SSB) and last Wednesday (CW) of each month
until the end of April, starting at 20:00z.

The next 80m contest is SSB on Wednesday 4th March.

80m Contest Rules
Upload Your Cabrillo Log Here
Realtime Scoreboards
UK/EI DX SSB Contest    31st Aug - 1st Sept 2019
Thanks to everyone who took part in this contest. Congratulations to Andy G1A (M0NKR) on winning the Kenwood SSB Cup as the UK/EI Unassisted Single-Op station with the highest score. Also to Neil G6MC in second place and all the other section winners. See the Results for full details....
Click here for the 2019 RESULTS
UKEICC Contest calendar - Downloadable ICS File   -   Follow us on Twitter and on Facebook
Membership is free and open to anyone - sorry our Membership sign-up is offline at the moment..pse QRX.
team[at]ukeicc[dot]com   -   Read our FAQ
All your personal data is securely stored on encrypted hard-drives and will not be available to any other individuals or organisations.